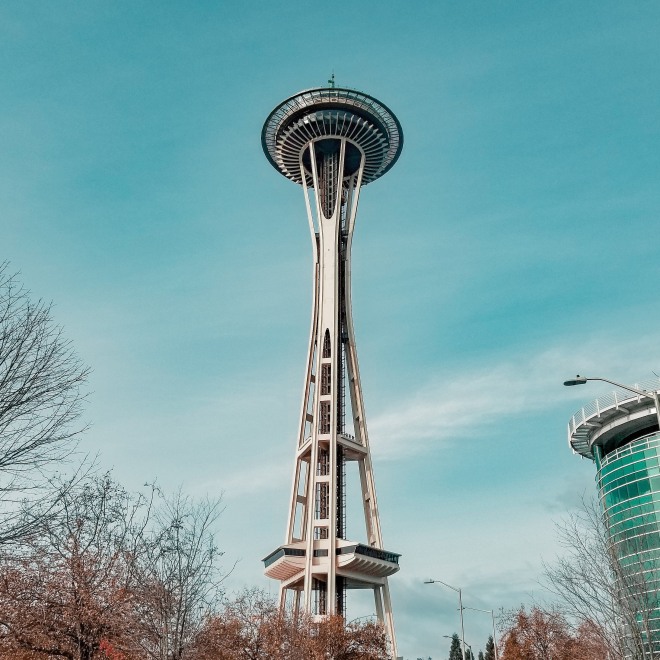 Seattle has been one of the cities I’ve been wanting to visit for a while now. It is high up on the list of places I’d consider moving to in the future. Perhaps it’s based on the influence of Grey’s Anatomy, or Sleepless in Seattle, but it simply looked like such a beautiful city.

On my way back from Hawaii, I had a 12 hour layover in the city, and I tried to make the best of it.

It was a super cloudy day. I had flown in from San Francisco, as that was my initial landing city coming from Oahu, and landed there around noon. My flight to New York left later in the night, so that gave me the perfect, albeit short, time frame to explore. I had planned this trip strategically to provide the longest layovers in cities I’ve wanted to visit. San Fran is #1 on my list, but my layover there was very short and in the early hours of the day, but I made the best of it. I visited the Golden Gate which in itself made the quick stop worth it.

Our initial stop in Seattle was evidently the Space Needle, one of the city’s most iconic landmarks. ‘

My experience at the Space Needle was wonderful. Once we purchased our tickets we were guided to the elevator that would bring us to the top. There was a guide at the elevator limiting the number of people allowed on the lift. Once we were all inside, the ride was fast and smooth with majestic views. For some portions of the ride we were surrounded by concrete, and then light from clear windows filled the elevator as we neared the top.

I am not afraid of heights, therefore the ride and the views that came with it were absolutely amazing to me. Once we reached the top there was a bar area with windows and doors that gave access to the outskirts of the Needle. The very edge of the the gallery is closed off with windows. but we were able to get a clear view.

Again, it was a cold and cloudy day, as I’ve heard is the norm for Seattle, but it did not rain during my time there, which was great. After the Space Needle tour, we headed to find somewhere to eat dinner. We had last eaten an early breakfast in San Francisco before hopping on our flight, so it was time to get some dinner.

We stumbled upon a spot with New Orleans inspired cuisine, which I thought was pretty cool. I’ve never been to New Orleans, though it’s up next on my list, but I’m from Creole roots so it was lovely seeing a place that represented that all the way on the opposite side of the country.

The place is called Toulouse Petit Kitchen & Lounge. The design of the place was lovely! It’s super dark with little lights all throughout the place. There was a bar on the right back side that was a little more lit, and the eating area was more dark and ambient. The service was wonderful, as was the food.

Quite frankly, I can’t remember what I ordered, I even looked up the menu to see if my memory could be sparked, but to no avail. Nonetheless, the food was very tasty. We also ordered dessert, which was overall also very good. My brother got beignets, and though they were not the best I’ve ever tasted, they were pretty good.

After dinner, it was nearly time for our flight, so we headed back to return our rental car, and check back in to the airport.

Seattle was a place I’ve wanted to visit for a while now, and though this trip was very short, and only a quick hello, it left me wanting to go back and spend more time. I’m beyond excited to allocate time to go there and truly feel the life of the city.

Have any of you visited Seattle? or perhaps live there?

Let me know your experience and any suggestions for next time.