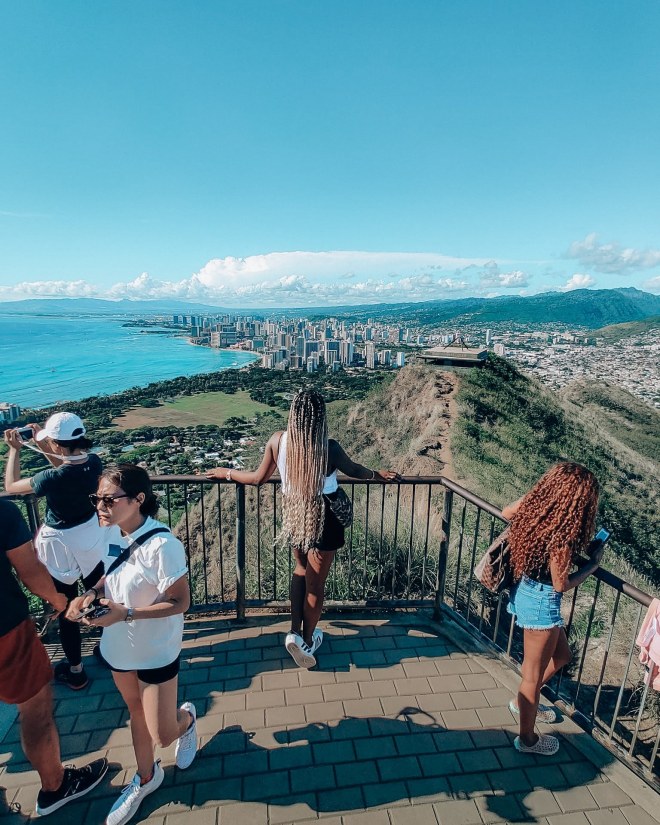 In early November I was able to travel to the Pacific and have the best experience of my life.

The trip was a week filled with flights, hikes, boat rides and self-discovery.

I planned this trip strategically so that I would be able to visit as many places as possible. Therefore, I made sure to get as many layovers for the longest time frame I could find.

Leaving New York’s JFK on the morning of November 2nd, I embarked on a 5 hour flight that saw me land across the country, in a city I’ve come to love; Los Angeles.

My first trip to LA was taken in January of last year, and the 6 days I spent there left me with a profound love for the city I knew I’d one day want to call home. Therefore, I knew I couldn’t fly over it without stopping by.

Our layover in LA was the longest one of the entire trip, lasting nearly 24 hours. I can’t explain how happy being back in LA made me. I went back to the Walk of Fame, stopped for some IN & OUT, the Hollywood sign and just the neighborhoods of LA. I tried to squeeze as much as I could in the day. The short length of the stay was saddening, but I was excited knowing what the next stop was.

It took about another 5 hour flight to go across the Pacific and land in Oahu, Hawaii; one of the many islands in the chain.

Upon landing, we got the warmest welcome from the Hawaiian people in the airport. As soon as we stepped out of the double doors, the humidity and heat enveloped us.

After checking into our hotel, the Grand Waikikian, I checked out the suite and the view, and then crashed as I had been traveling for hours. As much as I love airplanes and flying, traveling is still very much a draining experience.

The next day was also a pretty calm day, we went out and explored the city a bit, with no itinerary. Waikiki, where we stayed, is a very tourist based area. There are loads of high rise hotels in the area. Nonetheless, it’s very beautiful. Our hotel room had a balcony with a view of both the city and the ocean, so that was lovely.

Afterwards, I hiked up Diamond Head. It is a dormant volcano, and a popular hike site amongst both tourists and locals. It was the perfect activity to start our trip.

By then, I had already taken in some of the beauty of the island, but this hike truly left me mesmerized. I can’t remember precisely how long it took to get to the top, but it was most definitely physically taxing, even moreso for me, because I forgot to bring along water. The views once we reached the top though made it all worth it.

Half way through the trip, we decided to do a bit of island hopping, simply because we figured we couldn’t go to Hawai’i and not go to Maui. So we hopped on what would be the shortest flight I’ve ever taken, to go see this gem of an island.

Maui is completely different in comparison to Oahu. Upon landing, through the airport, it automatically had a calmer tone. The island’s population is significantly less than Oahu’s. We also didn’t entirely make it to what I’m guessing would be their tourist areas, since we weren’t planning on staying, there was no need to go there.

Instead, we chose to spend the day on the Road to Hana. It was a magical experience. There are so many beautiful sights alongside that very intricate road. I will let the pictures speak for themselves.

Maui is a beautiful place. Along the road, we stopped for food at this little shack that made barbecue. It’s incredibly fascinating just how small our world can be. The couple who owned the shack engaged in conversation with us. They asked us where we were from and how long we were staying. We proceeded to inform them that we were actually staying in Oahu, but were visiting Maui for the day. They totally approved our island hopping idea, in fact giving it the title before we did. Then, when we told them we were from New York, it turns out they had moved from Brooklyn to Maui. Evidently, that’s quite a change of pace, but they seemed like people who enjoy adventure and living life to the fullest. Their kindness and hospitality left such a warm impression on me.

We then found a lava tube (a natural conduit formed by flowing lava which moves beneath the hardened surface of a lava flow.) and explored a bit.

That proved to be an amazing experience. It was very informative as well as they had signs throughout the path explaining different aspects of the tube.

The drive along the road was very complex. Interestingly, if the road was a straight line, it would only take 30 minutes to reach the other side, but because of all the turns and narrow paths, it took many hours. There is also no light along the road at night, so it’s always recommended to start the journey as early as possible.

Furthermore, along the road there was also a Red Sand Beach and a Black Sand Beach. They are exactly what they sound like, and are simply majestic. Words alone cannot describe their beauty.

The brief time I spent in Maui, showed me a glimpse of why it is said that most prefer it over the other islands. Beautiful doesn’t even begin to describe it.

After a packed day in Maui, we flew back to Oahu.

The next day took us parasailing and underwater on a submarine.

Parasailing, though a bit nerve wracking at first, was an amazing experience. The views of the oceans below you, the feel of the wind blowing on your face. It’s just a thrilling experience.

The submarine although very cool, was a bit underwhelming. Our host was amazing, and very informative; but the entire experience felt short. They showed us all artificial reefs, and though the sea life was evidently authentic, I suppose I wanted to see a more authentic environment, with even more sea life.

The next day was our last full day, and we ended our trip with a Luau performance. I must say, without a doubt, if you’re ever in Hawai’i, it is a must see. I was very skeptical at first, considering the ticket isn’t the cheapest, and I felt there would be more worthwhile activities to spend my money on; but I am truly so glad I gave in and went.

Hawai’i was a life changing experience. I’ve never felt more connected to the Earth. I’ve never met a kinder, more beautiful people. It is an experience I shall never forget, and one I hope to re-create sometime soon.

I planned this trip so that I would have as many long layovers in cities I wanted to visit, and so that I would get the most out of my money. This post is long enough as it is, so I will leave it here, and make the next one about the two cities I got to see for a few hours.

Here are a few more pictures from the Pacific.

Hope you enjoyed reading about my experience. Feel free to share the links to yours, or tell me about them, wherever it was that you went. I would love to know what to add to my travel list.

With all the love,